The party committee is in charge of holding movie nights every other month. Teiresias members attend for free, all other attendees must pay 2 euros. Most movie nights are opened with a mini-lecture given by a student or a professor that connects the film and its relation to ancient, medieval, or renaissance history.

The party committee also is in charge of organizing the Interclassical Drink/Party Night with other ancient students at universities around the Netherlands. This event is usually costume-themed and is a fun way to get to know like-minded ancient historians studying at various Dutch universities. This event occurs usually twice a year.

Asterix and Obelix: Mansions of the Gods 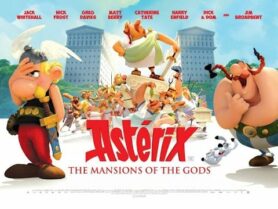 Clash of the Titans

What We Do in the Shadows

Our very own Teiresias Board President Stefan gave us a mini-lecture on vampires and medieval history before beginning the film. Our Halloween movie of the year. To celebrate the scariest time of the year, besides exam time, we watched the movie “What We Do in the Shadows” for movie night.
Did you know that the ancient Greeks were scared of vampirical creatures? You won’t find a better link with Ancient History than that!

On June 6, 2019 the Party Committee of Teiresias Student Organization organized a movie night. The Dutch film is about the Frisian King Redbad. Before we watched the movie, Erik Goosmann, the author of the book, Redbad King on the Margins of History, told us a bit about this ruddy rebel.